By March 11, 2021 No Comments
FacebookTwitter 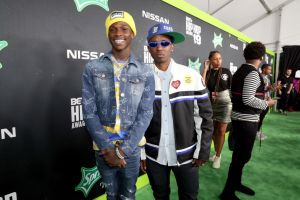 The tragic shooting death of King Von occurred after an incident between the rising rapper and the crew of one of his contemporaries in Quando Rondo. While the Savannah, Ga. rapper has since moved on while expressing remorse, a recent response on Instagram suggests that the moment still looms heavily in Rondo’s life.

The exchange between Quando Rondo and the fan occurred on the rapper’s Instagram page and was grabbed by Akademiks and shared on the social media network.

The fan replied under Rondo’s IG post, “How about you donate to Von family no more of the streets be a good man the situation happened already you can make it right if YOU want to god forgives but that mans kids will never.”

Rondo responded, “Von got his self in that situation I didn’t even no cuz had pressure with me,” adding a broken heart and 100 emoji at the end as an accent.

An affiliate of Rondo’s, Lul Timm, was charged with felony murder in the death of King Von. Footage of the incident suggests that Von started the fight and that Timm reacted in self-defense. There was also footage of Rondo attempting to tend to Von’s wounds and assist him.

Adding a curious wrinkle to Rondo’s recent comments is the song “End Of Story” in where Rondo speaks directly to the incident in question, the rumors that there was a bounty on his head in connection with Von’s death, and that Timm and others on his side were simply defending themselves from harm.

The exchange as it happens between Quando Rondo and the fan can be seen below.